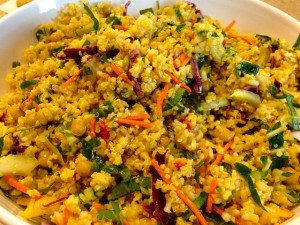 We love grain, bean and veggie salads! The versatility of these easy-to-make salads is rocking. Toss them together on Sunday and you have a week’s worth of lunches and dinners – all delicious and all super nutritious, too. Once these simple salads are made we can think of more than a dozen ways to enjoy them: stuffed in a flour tortilla, corn tortilla, wrap, avocado, tomato, sweet potato shell, lettuce leaf, or in just in a bowl.

One of the best features of a salad like this, is the mix and match ingredients. No quinoa in the cupboard? Use barley or wheat berries. No brown rice? Double up on the millet. You can shake up the veggies and beans, too. We love to substitute black beans and crunchy fresh sweet peppers for the chickpeas and roasted red peppers. Your imagination and your kitchen are the only limitations.

Coriander is an ingredient in the Spectacular Salad dressing. You may know that it is actually the same herb as Cilantro! Its called cilantro or coriander in different parts of the world. Here in the United States we typically refer to the fresh herb as cilantro and the dried herb as coriander. What we call coriander is actually the dried fruit of the cilantro plant – different from the leaves and stems we call cilantro. You can buy to whole seed at the grocery store, but most often a recipe calls for the ground dried seeds. Coriander has been shown to positively reduce blood pressure in many patients suffering from hypertension.  It is also high in iron which directly helps people who suffer from anemia. This power-packed plant has a wealth of bioactive compounds which are just being discovered in studies. 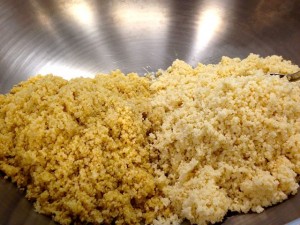 Quinoa (left) and Millet (right) in the bowl!

Shake all the ingredients together in a jar.

½ Shredded Red Cabbage, salted lightly and placed in a colander to soften (do this while you are prepping the other ingredients)

Toss all the ingredients in a large bowl and toss with the dressing.