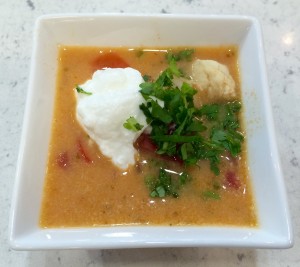 Its Soup time! We’re rolling into the soup season of fall. And there’s nothing like a fabulous recipe filled with seafood, herbs and spices to make us all want to get in the kitchen and cook.

This recipe is perfect for a festive dinner with family and friends. Instead of using heavy cream to make the soup rich and luscious – we are using coconut milk! We use two of our favorite herbs in this soup, oregano in its dried form, and fresh cilantro.

Dried oregano has many anti-inflammatory properties including altering cell cycle in the body and making cancer cells kill themselves (apoptosis). The herb also helps with GI issues and has many health claims because of its antioxidant rosmarinic acid. Now cilantro also has health benefits so it is a win-win in this recipe! The leaves and stem tips are rich in numerous anti-oxidant polyphenolic flavonoids. The most important being quercetin, which is an anti-inflammatory.

2 LB Tilapia or other white fish, cut in 2” Pieces

Heat the oil in a large sauté pan. Add the onion and red pepper and sauté over medium heat until softened, about 1 minute. Add the Coconut Milk, oregano, paprika, 1/2 teaspoon salt, and 1/4 teaspoon pepper. Bring the liquid to a boil and then simmer over low heat about 5 minutes.