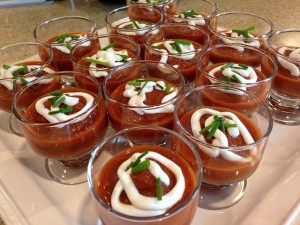 There’s no better time of the year to enjoy chilled soups than the steamy sultry month of August. This rich and creamy soup is full of flavor and veggies, without all the cream. And topping this cooler is the bright light oniony taste of chives!

We love chives for their versatility and subtle flavor. Raw or cooked they add a distinctive touch to any dish. Chives are a part of the allium family (onions, scallions, etc) and are very nutrient-dense, meaning that while they are low in calories they are high in beneficial nutrients like vitamins, minerals and antioxidants. In fact, allium vegetables have been studied extensively in relation to stomach and colorectal cancers. Their beneficial and preventative effects are likely due in part to their rich sulfur compounds. So the more potent the smell, the better for you!

Who needs to wait for cool days for a cup of soup? We don’t and you won’t either when you puree up this crowd pleasing soup!

Place the eggplants, tomatoes and peppers in a stockpot. Puree with an immersion blender until smooth. Serve warm or cool, garnished with yogurt and chives.