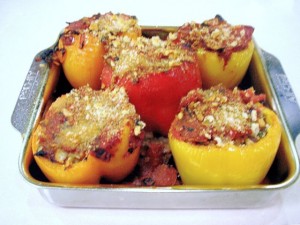 Just the color of these peppers make us smile! Here’s a stuffed pepper recipe that is redolent of herbs and spices and fresh, fresh flavors. Perfect for the Halloween weekend, perfect for fall! We are featuring Allspice this week, not a blend of spices, but a single spice from the Pimenton tree. The components provide an unusual aroma but can also ease digestive symptoms such as diarrhea, nausea and vomiting. In addition, allspice may provide relief for gas. This fragrant spice acts as a relaxant to aid stomach cramps and conversely acts as a stimulant to aid digestion.

Originally grown only in Central America and the Caribbean, now it is grown all over the world. Named by the English in the 1600’s because of its combinations of flavors: cinnamon, nutmeg and cloves, its luscious aromas of warm baking spices add a kick to the fruit and veggies in this stuffed pepper. (Even only ½ Tsp adds lots of zip to the recipe!)

Step One Preheat the oven to 350F. Cut the tops off the peppers and remove the seeds. Set aside.

Step Two To create the stuffing, heat 3 TB oil in a large pan and sauté the onion until golden. Add the ginger and spices and cook and stir for 1-2 minutes until aromatic. Add the rice and sauté for 1-2 minutes until coated with the oil. Add  2/3 of the tomatoes, fruits, juice and water. Let it simmer for 10 minutes until most of the liquid has been absorbed. Remove from the heat, and add the next 6 ingredients.

Step Three Place the peppers upright, side by side in a pan or casserole. Spoon the stuffing into the peppers. Don’t press down, so it will have room to expand.

Step Four To create the sauce, toss the remaining tomatoes and the 2 TB of oil together and place on the top of the peppers and pan. Cook for 45 minutes, basting the peppers with sauce from the bottom of the pan.

Step Five Turn the oven up to 425F, Scatter the breadcrumbs on top, and bake until the crumbs are golden.