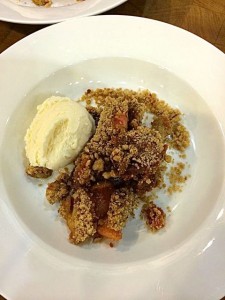 Its getting to be that time of year…Here in Georgia we celebrate Apple Season from the end of September through mid October. Whether they are Gala, Winesap or Mutsui, we love using them in all kinds of recipes, savory and sweet.

Traditionally, apple cobbler and pies can hide a lot of calories and fats. Even apple bread that sounds so healthy can pack a punch in bad fats. But this recipe delivers the same apple deliciousness as those treats – without all the bad-for-you ingredients.

What could be a better partner for apples than Cinnamon? When the luscious aroma of this spice is filling the kitchen, we know that fall weather is not far away. Cinnamon not only makes many dishes smell and taste great it also is great to control blood sugars for diabetics. When Shayna is doing a nutrition session with a diabetic she recommends eating a small amount of cinnamon each day (in this recipe, a smoothie, on yogurt, or even on steel cut oats). And about ½ tsp per day can also lower the bad cholesterol (LDL).

Zest and Juice of 1 Large Lime

Step One Spray a 9 x 12” casserole dish with nonstick spray. Preheat your oven to 350F.

Step Two Combine the butter & 1/3 cup brown sugar in a mixer. Beat until smooth. Add 1 cup of the flour and the almonds and beat until just combined – it should be crumbly.

Step Three Place the peaches and figs in a bowl and toss with the zest and juice of the lime. Stir in the remaining 1/4 cup flour, 2 TB brown sugar and the cinnamon.

Step Four Place the peaches and figs mixture in the bottom of the prepared dish. Sprinkle the flour and almond mixture on top and bake for 30 – 40 minutes or until brown and bubbly. Serve warm with the vanilla frozen yogurt, if desired.