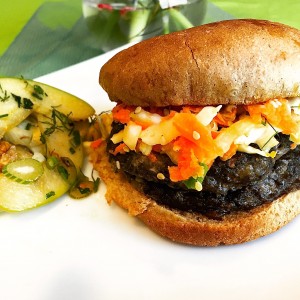 Mushroom burgers that almost taste like juicy beef burgers? Sign us up! These burgers are not only juicy and delicious, they are easy to make and fun to share with friends and family!

Have you ever used Five Spice Powder? It’s a blend of star anise, cloves, cinnamon, Sichuan pepper and fennel seeds. What a power packed mix! For starters, the fennel seeds contain strong antioxidant properties that are known to reduce inflammation and effectively remove harmful free radicals in the body, thus protecting from cancers, aging, infections and degenerative neurological diseases. Cinnamon contains strong antibacterial properties and is very good to keep blood sugars under control for diabetics. Finally, star anise can ramp up your immune function and fight viral infections such as the cold even with small amounts of this spice.

Step One Mix the mushrooms through the pepper together in a large bowl. Shape into six thin patties – they will be VERY moist.

Step Two Place into the fridge to “set up” for an hour.  Cook in 400F oven for 10 minutes, without flipping.  Serve on the buns with the *Asian slaw.

Toss the cabbage through the sesame seeds together in a large bowl. In another bowl, whisk the mayo, oil, mirin, Vinegar, Braggs and juice. Add it to the cabbage and toss. Season to taste with salt and pepper.